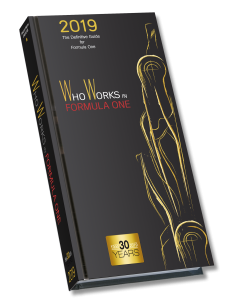 The main goal of these guides was to respond the need of professionals & fans by bringing together all the information that they needed in one single, easy to use, easy to carry book.

Their first PUBLICATION was Who Works in Formula One, and it was an instant success! Building on this success, Who Works went on to produce the official guides for the World Rally Championship, Renault Promotion Formulas and the French Rally Championship.

The next step in the Who Works story was crossing the Atlantic in 1995 to conquer the USA! As François-Michel said : « We had the privilege of producing comprehensive guides for CART (formerly IndyCar) and NASCAR up until 2000. This was a major achievement for Who Works as we were the first non North American company to achieve this. Then, having concentrated on 4 wheels, our next big challenge came from the world of 2-wheeled motor sports. DORNA (the commercial rights owner of MotoGP) asked Who Works to produce the official Guide for MotoGP; this was successfully launched in 2000 and published until 2005 « .

In 2005 we introduced Who Works in Motorsports, produced in the in the same format as our other guides. This totally unique 1000 page thick bible and the only one available on the market covering over 15 to 18 major international series and world championships is now published as an e-book and application only.

Over a period of 30 years, the initial, very basic distribution metamorphosed into an efficient worldwide network backed by a vending website (www.whoworksin.com). The Who Works Sports Guides are now sold in more than 70 countries.

Most of our readers buy our guides again (we have a fantastic renewal rate of nearly 80% each year). Most of the Blue Chip companies that have been involved in F1 and motor racing have supported our publications so far, some like TAG Heuer, Mumm Champagne and the Total Oil Company having been our partners for over 25 years.

2016 saw the launch of the longtime expected smartphone, tablet applications and e-book enabling the reader to be in direct contact via  hyperlinks with names, positions, addresses, phone numbers, e-mails, Facebook and Twitter within the motorsport community when travelling on the circuits or on business trips.